A simple way to save money with Tesla Car 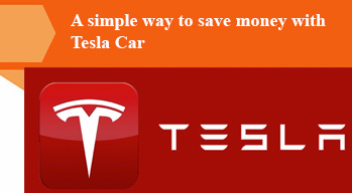 The future of passengers cars is here and Tesla Motors owns the credit of innovating better options to save money and fuel with electric cars.

With the global outcry on the relentless and unplanned use of our fossil fuels, specially the petroleum products, it was only a matter a time that some automobile company would come up with a mass produced car that could take our reliance away from the expensive and exhaustible petroleum products. Although many companies, for many years have tried and tasted limited success in the production and sales of vehicles with alternate power sources, none has been able to really take the production, distribution and development of Electric Motor Vehicles such as the American Automobile company ‘Tesla Auto’. Shooting into global prominence upon the launch of its first fully electric sports car, the “Roadster “in 2008, also dubbed as the first highway capable all electric vehicle in serial production in the world, and building upon its success of selling more than 200 units of the vehicle in almost 30 countries, Tesla Motors firmly established itself into the newly created and fast growing niche of the BEV(Battery Electrical Vehicle). Although the company first turned profitable only in the first quarter of 2013, but it did impress the automobile aficionados of the world with its further innovative Tesla electric car models such as the Luxury Sedan Model S, and the first electric crossover of the world Model X. The worldwide sales of the model S passed the important landmark of 100,000 units in the last quarter of 2015 and was the world’s best selling plug in electrical vehicle in 2015. So far, the company has been able to sell more than 1, 25,000 vehicles throughout the world, since the launch of its first vehicle, the Roadster which was introduced around 8 years back. The upcoming Tesla Model 3, slated to be the most affordable Tesla car yet and to be launched for sale in late 2017, is expected to turn huge volumes and make the battery powered cars much more within the reach of the common people, since this Tesla car price will be quite competitive in its segment. The TECHNOLOGY behind Tesla:

Unlike a traditional petrol or diesel powered vehicle, cars made by Tesla have much fewer parts and electrical systems. The biggest and the most noticeable technical difference is that the electric cars manufactured by them does not have the tried and tested Internal Combustion Engine but instead has a large group of rechargeable Lithium Ion batteries. In fact, the Tesla car, Roadster has 6831 of these batteries.These batteries are fitted into 11 separate sectors holding 621 batteries each. An advanced computer processor controls these batteries to ensure that the batteries charge and discharge seamlessly and does not let the vehicle undergo a power shortage at any point.

The batteries are charged through a system called a Power Electronics Module (PEM) which is basically a power inverter that converts DC power to AC power using insulated gate bipolar transistors (IGFBTs). These super efficient batteries, first used in laptops, can provide an impressive output of 200Kw of energy. To put things into perspective, this much power can light 2000 light bulbs. The same Power Electronics Module also controls various other critical functionalities of the vehicle such as the voltage levels, the all important RPM, torque and the braking system. There are multiple onboard sensors in the vehicle that sense and analyze all the important parameters such as acceleration, deceleration, tilt temperature and presence of smoke etc.

SO CAN THERE BE SOME REAL SAVINGS USING A TESLA

Although the initial Tesla automobile price is quite substantial, but research proves that the extra money shelled out during the purchase can be made up in substantial savings in the coming years of the life of the vehicle. The following pointers can prove that and it does make sense to own a Tesla car not only towards owning a top of the line powerful luxury car but also have substantial savings when seen with a long term vision. Although the financial savings of owning a Tesla automobile can be quite a bit, but the positive environmental impact is also something worth active consideration. Since there is zero emission in a Tesla car, it can have a significant impact on the pollution levels of any place, especially the ones that have higher levels of pollution. With governments and organizations all over the world looking at ways and means to reduce our dependence on fossil fuels and engage in more efficient and sustainable practices, it is only a matter of time before many more automobile manufacturers start investing in the BEM technologies and can create affordable and economically viable Battery Operated Cars, which can quickly be scaled up and popularized, such as the Tesla Model 3, which has a huge demand, even before launch. With the immense demand of motor vehicles in developing countries and the environmental laws becoming stricter at the same time, these electric powered cars hold a great potential in terms of sale, specially the pioneer companies like Tesla Motors that makes only electrically powered vehicles and has great expertise and experience in the field.