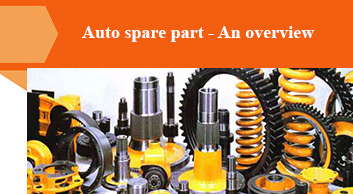 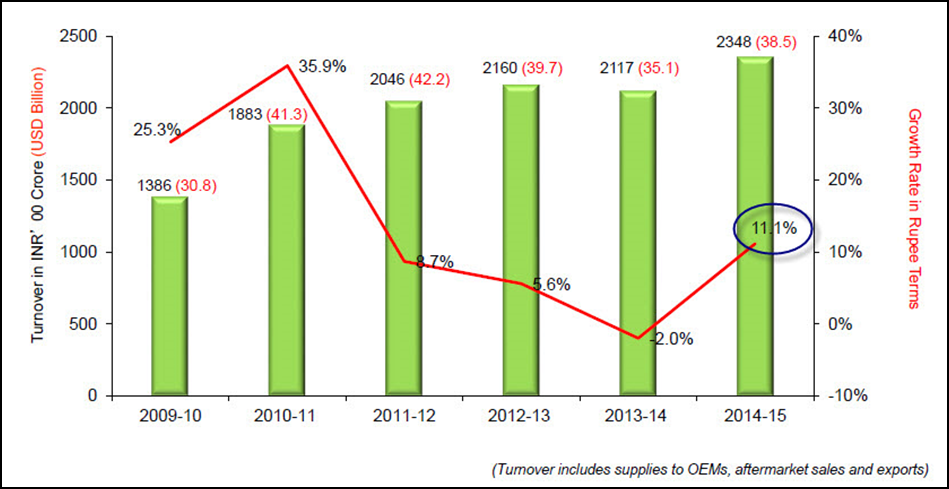 The industry is transforming itself from a low volume, highly fragmented industry, into a competitive industry backed by competitive strengths, technology and transition up the value chain. Various factors such as abundant low cost labor, local availability of steel, alumunium and natural rubber, strong ancillary and 100% FDI(Foreign Direct Investment) allowed in the sector, have attracted global auto major to set up large capacities in India.

Further, with the potentiality of addressable market as India’s current average of cars/1000 people is 15, which is among the lowest in the world as compared to China’s 60 and Brazil’s 200 in 2012-13. Even with this portfolio India’s automobile sector plays a vital role in the economy and contribution to national GDP and manufacturing is 6% and 22% respectively.

The Indian automobile industry has witnessed weak & sluggish demand from 2012-13, having a direct impact on auto component turnover which declined by approximately 6% in 2012-13 and 5% in 2013-14 year on year (YOY).

The main reason for the slowdown is because the foreign investment in the sector declined localization and buoyant replacement, export market and increasing sophistication of vehicles is to around US$ 1.6-1.9 Billion (INR 99.2-118 Billion) in 2011-12 as compared to US$ 2-2.5 Billion (INR 124-155 Billion) in 2010-11 due to moderation in vehicle sales and depressed market senti- ments.

Favorable factors such as, higher also contributing to better prices for value added parts. All these factors should translate into better revenue growth and capacity utilization in medium term hence, auto component turnover is expected to reach US$ 100-115 Billion (INR 6200-7130 Billion) by 2020.

India is emerging as an export hub for auto industry. Export encompasses 29% of total auto component production. From 2010-11, export grew at a CAGR of 15.62%, to reach US$ 10.2 Billion (INR 632 Billion) in 2013-14. In total auto component export, 80% of it, are supplied to global original equipment manufacturers (OEMs) around the world.

The strong and steady government and credibility of domestic component makers have led to many global companies setting up their sourcing centers in India. Looking at the growth factors and over all growing demand, India export of auto component is expected to reach US$ 40 Billion (INR 2480 Billion) by the end of 2020.

India’s auto components imports are mainly in two categories - high tech parts which come mainly from Germany, Japan, Korea and Thailand and aftermarket parts which are usually originating in China. In 2012-13 China continued to be the number one country contributed 19% of total auto component imports, followed by Germany and Japan with 13.5% and 11% respectively

In 2012-13 annual sales for passenger and commercial vehicles in India had declined for the first time in 11 years effect on the imports which declined by having a direct 6.5% in 2013-14.Through the past two years, the gap between component exports and imports has narrowed sharply, as Indian automobile market is expanding and all manufacturers have focused on increasing localization.

To keep its stake high in automobile industry, India need to increase the level of  investment in research & development (R&D) capability, as India spend less than 1% of total net sales in R&D as compared to Europe, which is around 5%.