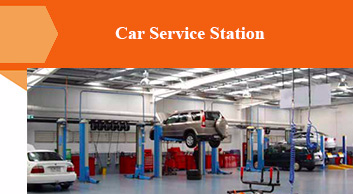 In India independent service stations are both organized and unorganized. At present, India passenger car service and after sales market is estimated to be US$ 2.5 Billion (INR 155 Billion), of which nearly less than a Billion is from organized independent network of service station. Over 70% of the 19 Million active users (across segments) look for alternate options for repairs post warranty period. Further, with increasing car per citizen, growing disposable income and positive growth of automobile industry, is creating a huge demand for independent service stations in the near future. Over the past five years many players have entered in this segment. Players such as CarZ and MyTVS hold a strong market share in the organized independent service station market in southern India, whereas, Mahindra First Choice Services (MFCS), Carnation and Bosch are concentrating in Northern India. All players are working on expanding their geographical presence in order to tap the growing addressable market.

Figure 7-1: Proportion of Car Serviced in Independent Stations by Distance Covered (In Kilometer) 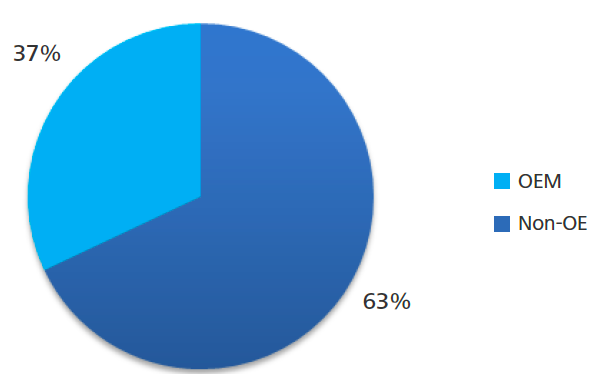 Most organized independent service station conduct promotional activities for creating awareness about their service stations to car owners. They mainly use paper pamphlets followed by newspaper and internet to promote their services. The reason for high usage of leaflets/pamphlets in these stations can be attributed to the majority of local customers in these stations and the cost effectiveness of this mode of promotion. Note: Others include Word of Mouth, Text Messages, Canopy & Kiosk

The share of services and parts of revenue per car varies from station to station depending on the level of infrastructure and skills of workforce used by the independent stations.
Most times services hold the least proportion approx 26% in the case of independent service stations and the balance revenue come from spare parts.

Figure 7-5: Share of Revenue for Service and Parts in Independent Service Stations 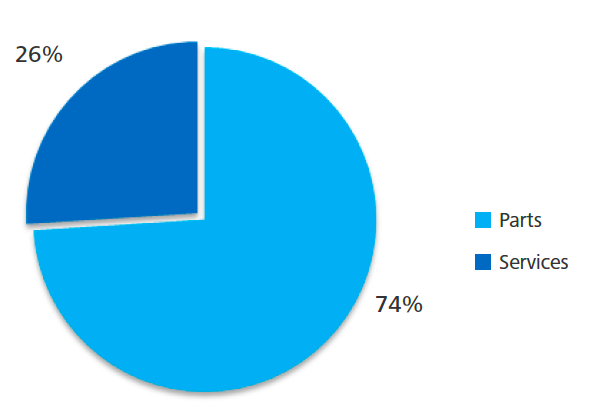 In Delhi NCR, Non-OE brands like KBX, Rane, Gabriel, Talbros, Purolator and Elofic are the preferred brand. The reasons for preferences in independent station are higher profit margins and easy availability of these brands.

Only organized independent service stations use software for inventory management, which accounts 16% of the total market. Unorganized stations generally use traditional mechanisms to manage inventory for the needed spare parts. Use of paper catalogues and Software saved on personal computer account for 4% each of the market. As per the research it was found that most stations do not have IT infrastructure to manage the inventories. 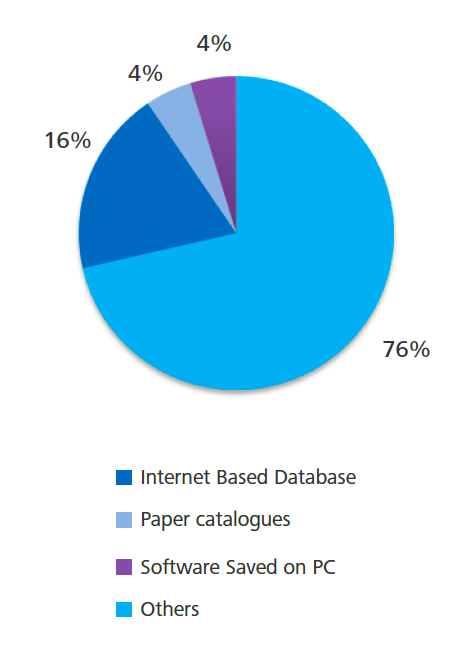 Authorized service stations in India are operated or approved by automobile manufacturers, to carry service, repair, reconditioning or restoration of passenger cars. The routine servicing and maintenance at these service centers has been declining over the last three years. The proportion of car owners opting for authorized station declined from 91% in 2011 to 69% in 2013. Besides, there has also been a drop in the number of customers opting for extended warranty programs, which is essential for an authorized service station to build strong customer relationship in the post-warranty period. We could also observe a new trend of many OEMs expanding their authorized service station and enhancing smart after-sales service.

Figure 7-7: Proportion of Car Serviced in Authorized Stations by
Distance Covered (In kilometers) In authorized service stations more than 50% of cars fall between 10K-40K kilometers range, which includes regular services such as Oil/fluid change and brake services. Other services include, but not limited to electronic/electrical and suspension/amortization. These parts only get replaced either in the case of accidents or with aging of the vehicle. Figure 7-9: Share of Revenue for Service and Parts in Authorized Service Stations (%) 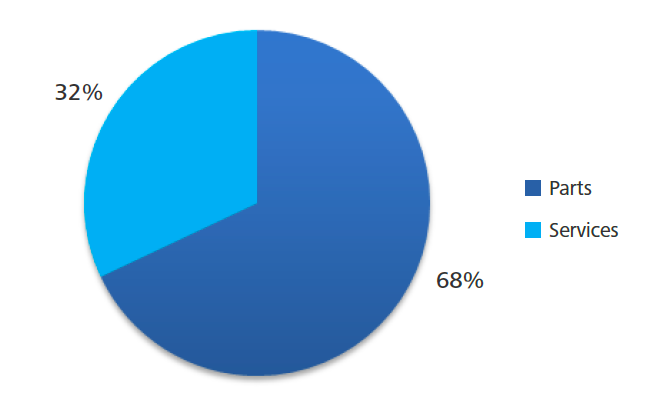 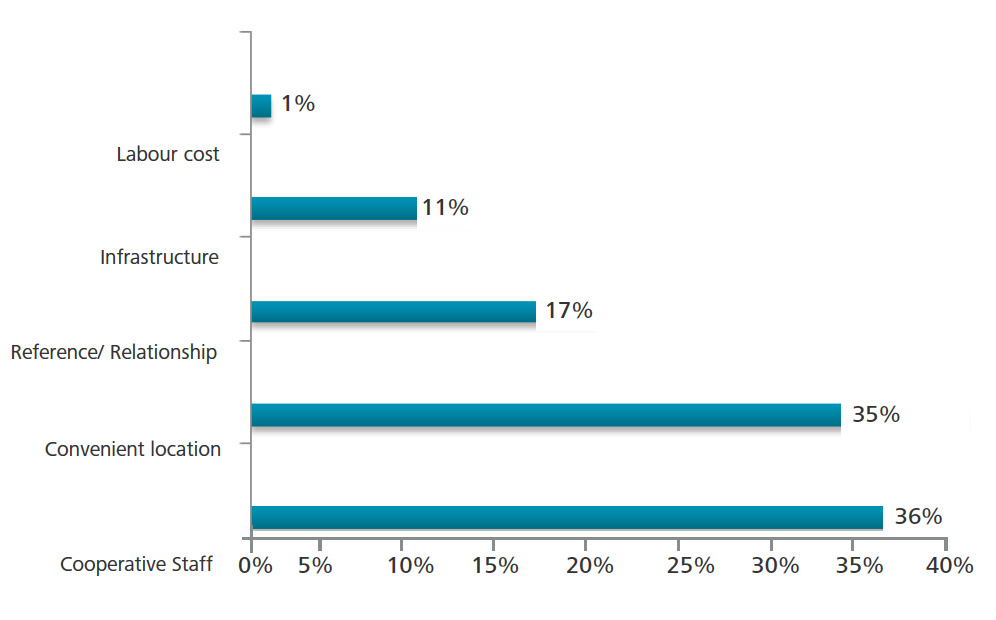 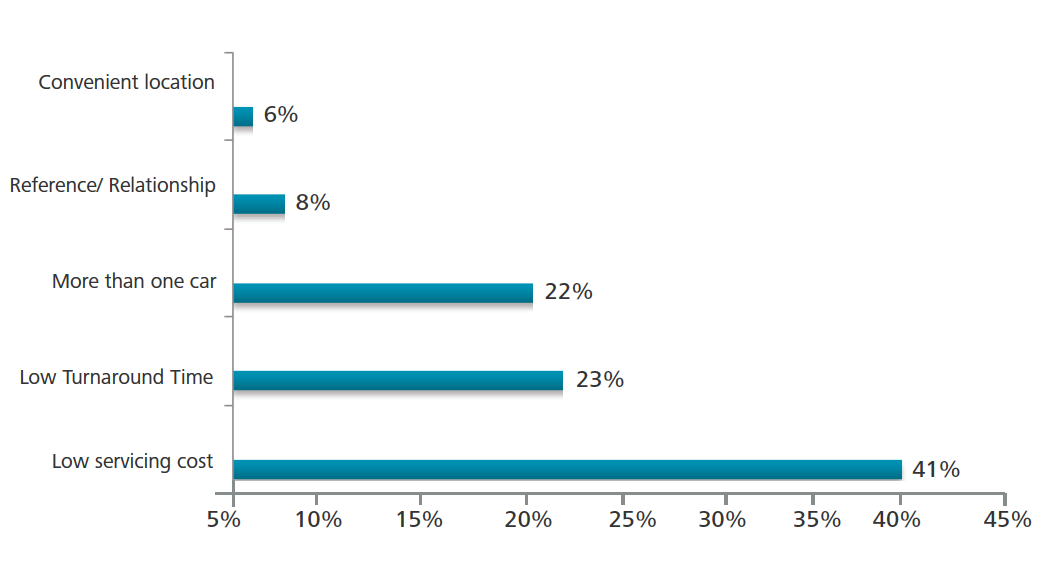 Authorized service stations are well connected with internet based databases, to locate and order spare parts and manage their inventory. They are connected with OEM servers for any queries related to spare parts, which provide complete information on the number of warehouses and their availability of spare parts. However, they need to order at least a week in advance, as logistics need to be managed.