Know the difference in Genuine and OEM spare parts 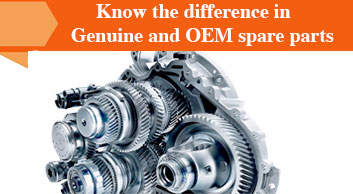 Find out the difference between OEM and Genuine auto parts...

The car you own regarding of the technology it belongs to (such as German, American, Italian or any other) is made of thousands of parts hundreds of other manufacturers. All automakers use independent automotive companies to design and produce various spare parts to make up a car. What exactly this means to the customer? Whether they are genuine or OEM parts. To understand it better keep on reading the story below.

What is a Genuine Part?

It is a variety of spare parts which was originally placed into the vehicle when it was new and has the manufacturer’s logo on it. However, this does not mean those products are being manufactured by the automakers, and most of the times, these car parts are produced by other manufacturers with the company logo on it. These spares cost your maximum as you are required to pay for the company’s logo.

Most of us believe in replacing our failed spare parts with a genuine one which has company's logo on it otherwise the warranty will be void. This is not more than an another myth which leads people to follow unneeded paths. There is an act called “The Magnuson-Most Warranty Act” in which no car manufacturer can deny warranty in case aftermarket parts are being used. A warranty can not be voided in case you take your vehicle to other than dealership repair shops or you repair at your home.

It is a known fact that the parts your car brand new car comes with will never ever affect its performance. Read out below the other advantages of getting genuine auto parts in your vehicle.

The Assurity of Quality: - There is no doubt about the fact that having the same automotive components in your car like the time you bought it for the first time gives you the surety about the quality of parts. Though it may be a little costly as compared to aftermarket body parts it never harms your vehicle. These parts are meant especially for your vehicle and have been tested by the experts before using them in the vehicle.

No Trouble in Finding: -  In case you need a replacement for any of the spare part in your vehicle, you can straight away go the dealership and ask for it. Either they will give it to you at the same time or will get it for you. Finding these parts won’t be a much hustle as these were parts used by the company without hampering the performance.

Comes with a company warranty: - Just like we discussed earlier, there aren’t many people who know about the fact that using aftermarket parts will not affect the warranty. So people end up buying genuine parts from the dealership. The best part about genuine spares is that these come with a warranty and gives you mental peace of assurance from the company. In case you come across any issues within the given timeframe, the company does all the efforts of changing and replacement the parts for you without making you pay anything including the labor cost.

What are OEM parts?

An Original Equipment Manufacturer part, as the name suggests is built by the same company which manufactured the original product for the automaker. It is the same part which your car has but without company’s logo, unlike genuine parts. These works same as genuine spares but costs cheaper as you don’t have to pay for having the carmaker’s logo. For example, Lemfoerder builds suspension and steering components for companies like Volvo and BMW to use them during production. However, the company sells these components under its own brand name as OEM products.

Cost a little more as compared to aftermarket parts: - As said earlier, these parts are made from the ones who have built the part originally. Due to the fact the brand name is attached to them, these may be a little hefty to the pockets.

Difficulty in availability: - Unlike replacement parts you can buy locally, the availability of OEM parts are limited to the company dealership or some authorized dealerships which make it difficult to get these parts in remote areas of Indian villages. You might have spent so much of time in order to find those parts which can be a pain sometimes.

Cannot match the quality of some parts: - Yeah, you read it right, you pay more amount for these parts thinking that it will be of best quality, however, this is not the case every time. Some locally available or aftermarket companies better quality as compared to OEM auto parts at pretty less amount, making it a little cheaper and saves some money for your pocket. These manufacturers offer equal or better quality than OEM spares where you have paid extra amount just for the sake of the brand name.

Though genuine and OEM auto parts are pretty much same, however, it can differentiate on the basis of company’s logo attached to it. Both the parts are of same quality and offer similar warranty. But the genuine parts cost a little higher for that privilege of having a logo on it. To be frank, OEM parts are a great choice when it comes to price and quality while maintaining the repair cost low without affecting the resale value of your car.