The New Toyota Fortuner in India 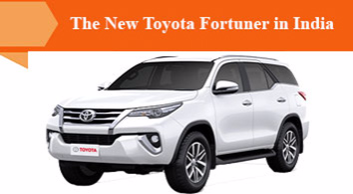 Know what all the new Toyota Fortuner has to offer...

We Indians are always in love with big machines, the ones powerful enough to overcome any hurdle with tussle. No other automaker understands it better than Toyota India. The company pulled off a masterstroke when they decided to launch the Fortuner in 2009, and continued to upgrade it as when required. Though several other automakers tried on the same platform but could not taste the success which the Fortuner got. However, the fight for the best SUV did not end here and the American giant Ford re-introduced its massive machine, the Endeavour and things started to change a little. But Toyota India wasn’t in a losing mode, hence decided to give its SUV a new upgrade. It was a little surprise for many when Japanese automaker decided to carry the same basic formula of - big dimensions, massive road presence along with the fair amount of chrome in order to cover all bases. However, the major difference is in styling, it is no longer a brute and has got some clean lines with shiny finish making it look upper market.

It looks like that a company understood the need of makeover in the Fortuner and decided to build a new car where everything is reworked. The new car sits on a ladder frame that has been made stiffer and has now got an all new 2.8 litre diesel engine. This time around, the designers have used various elements to make it somewhat look like rest of the Toyota’s line up. The waistline of the new Fortuner is pretty high having a prominent kink at the C-pillar to add some flair. The use of chrome and the clean lines makes it a little different from previous generation’s Fortuner, a less macho and more chic. Even the lamps are now more sleek with LED elements in it.

When it comes to interiors, the SUV seems familiar with large dashboard, leather upholstery and the steering mounting controls. It has a large touchscreen in the middle of the dash with aircon controls sitting right below it and off-road assist aids at the bottom. Now, the driver can switch to four-wheel drive through a rotary switch with the option of taking it to two-wheel drive for the regular use. This means that it is not a full time four-wheel drive anymore. There are various practical touches to make the cabin superbly functional. It comes with two glove boxes with cup holders, bottle holder along with the baggage hooks behind the front seats in order to carry bags. The company has managed to pack it well with all the essentials but fails to offer something that catches your eye. However, the company misses on things like dual-zone climate control, power seat adjustment for the passenger seat, an auto-dimming mirror and the parkings sensors upfront.

When it comes engine, the popular Toyota SUV gets an all new 2.8 litre diesel motor that provide enough power. It churns out the maximum power of 175bhp with 420Nm of torque in the manual version whereas the automatic version reaches the peak torque of 450Nm. It delivers the max torque as low as 1600rpm and stays constant till 2400rpm ensuring seamless power delivery without any lag.

Moreover, the SUV also get 2.7 litre petrol powered engine. It is the same engine which is used in the Crysta which makes 164bhp of power 245Nm of max torque. Unlike its diesel variant, it comes with five-speed manual ‘box or six-speed automatic transmission.

The ride of quality this new masculine machine from the Toyota India’s fleet is impressive and the new multi-link suspension manages to smoothes even the large potholes without any second thought. The new frame is better at the highway speeds, however steering communicates nothing more than a bump. What is more interesting about this new SUV is the number of technologies added to assist off-road conditions. Other than employing the function of shifting from two-wheeled drive to four-wheel drive, it has additional functions with brakes. If you have a free spinning wheel, the brakes stop it and take power to the other wheel during steep downhill. The driver can now engage DAC (Downhill assist control) in order to determine the decent speed automatically and uses the brakes automatically to perform the same function.

Overall, the Japanese automaker offered a mixed bag with the new Fortuner. The company has transformed its exteriors from brute like machine to a modern SUV, the interiors remain strictly okay. It is true that it has got an upgrade from the previous version, but it does not feel that stylish. The company could have done more. The slimmer dash and freshly arranged seats have given enough legroom for all the passengers and adjustable second row seats makes it comfortable for everyone.
The company has taken a safe way against the ban by bringing the petrol variant. The diesel motor is an obvious choice although manual/automatic debate is still open for the kind of driving you prefer. Its two wheel drive diesel motor ones cost INR 27.5 lakh for the manual and INR 29.1 lakh for the automatic, ex-showroom, New Delhi. In case you look to enjoy weekend adventures away from the city, you should go for four-wheeled drive variants which costs Rs. 30 lakh and Rs. 31.1 lakh for manual and automatic variants respectively.