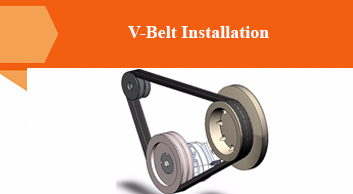 V-belts run longer and perform better if they are given the proper care and attention during installation, and in particular while following 48-hour running-in period. Failure to observe these installations could result in bodily injury.

1. Turn machine off and look out power source.

Clean oil, grease, and debris from sheaves; remove rust with a wire brush

Get your money's worth from a new set of belts by checking and replacing worn or damaged sheaves. In the long run replacement sheave cost will more than be recovered in increased belt life, reduced downtime, and lower maintenance expense.

b) Shiny sheave groove bottoms. This is a sure sign that the belt has bottomed out. The resulting slippage shortens belt life.

a) Do not mix old and new belts on a drive. A new belt will ride higher in the sheave groove and operate at a higher tension than an old belt. Running them together will damage the new belt so it cannot carry its share of the load.

b) Do not mix belts from different manufacturers. Because dimensions and constructions will vary, running such "mismatched" belts will not give full service life.

c) Replace with correct type and cross section belt. Match "A" section belts with "A" sheave grooves, "B" to "B" etc. Do not use "B" section belts in "5V" sheaves, or vice versa, Never replace "A" or "B", belts with "4L" or "5L" fractional horsepower belts. Remember that dimensionally similar belts can have very different horsepower ratings.

NOTE: Mount sheaves as close to bearings as possible.

NOTE: Store belts in a cool, dry place out of direct sunlight.