Why Car Body Parts are mostly Sold in Black or Neutral Colours? 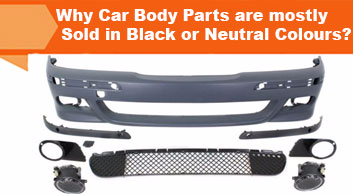 Do you know why coloured body parts are difficult to find? Here is why...

Once Henry Ford said, “Any customer can have a car painted any colour that he wants, so long as it is black”. This was said for Ford Model T, which was available in black colour only. This was the case because spraying various colours could have increased the cost due to the requirement of more staff, more complicated process at the same time increasing the risk of wrong colour being applied.

Over the time, the technologies improved and car makers started producing colourful cars to lure customers. Today, around 70 percent of cars shades grey, black, white and silver out of the total cars in the world, while red, blue and beige/brown colours account for 6 and 9 percent and rest of colours amount for less than 5 percent of cars. The choice of colour largely subjective depending on the fashion and other factors.

According to the surveys conducted by PPG industries and DuPont (American paint manufacturers) in 2012, white coloured cars are most popular across the globe followed by silver, grey and black. Neutral coloured cars are popular for many reasons. The majority of car owners expects to use the car for many years to come, hence, they go for neutral colours as these colours are tasteful, timeless and flattering than bright colours. Also, these colours can acceptably match with any other colour.

The same goes with auto parts as well. The majority of the body parts including the grille, bumpers, mirrors, panels, etc. are sold in black, grey and neutral, until the customers specially request for the one. And when it comes to the aftermarket, it is pretty difficult to find colourful parts. It also becomes impractical for the sellers to keep the whole range of parts in all the possible colours as most of the colours fade with time. For example, if you have a red coloured car, in two years of time, the car is most likely to get few shades lighter as compared to the one you bought with original colour. Even if you get the similar coloured part, it won’t match the colour of your car. Such parts even costs more as well. So, the best idea here is to get a part in neutral colour and get it painted to match the car colour.

It is the nightmare of every driver, when he is moving perfectly fine and suddenly a bad song comes. He takes his eyes off the road to change the music and when he glance back, there is nothing but a truck ahead. He tries to react in time and applies brake with full force but it’s already late and the car hits the truck. Now, you are going to need a new bumper, fender or probably a hood as well. There might be a possibility that the driver might not seeking to take the insurance and decided to get it repaired on his own. So, where is he going to buy those body parts at lesser price to make it worth?

Boodmo is your answer, it is an online marketplace to for car parts buyers who are looking for high quality spare parts at the best possible price. Customers can browse parts from the number of manufacturers, stating the product specification along with the price list.